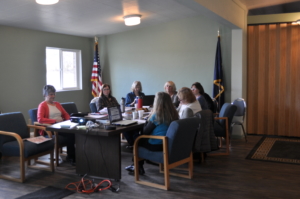 The City of Malin has remodeled the council meeting room at city hall.  The building was originally built as a medical clinic in 1956 and purchased by the city in 1999.  Many of the original rooms were used as exam rooms, one being an X-ray room and another for minor surgery and birthing room. The current meeting room was where numerous children were born in the fifties and sixties. In fact, three children of Malin City Councilor, Agnes Turner-Wise, were born here. People from all over the basin came to the Clinic for their medical needs until it closed in 1996.  The city is looking forward to having a larger meeting room to accommodate the public and also to modernize their workspace.